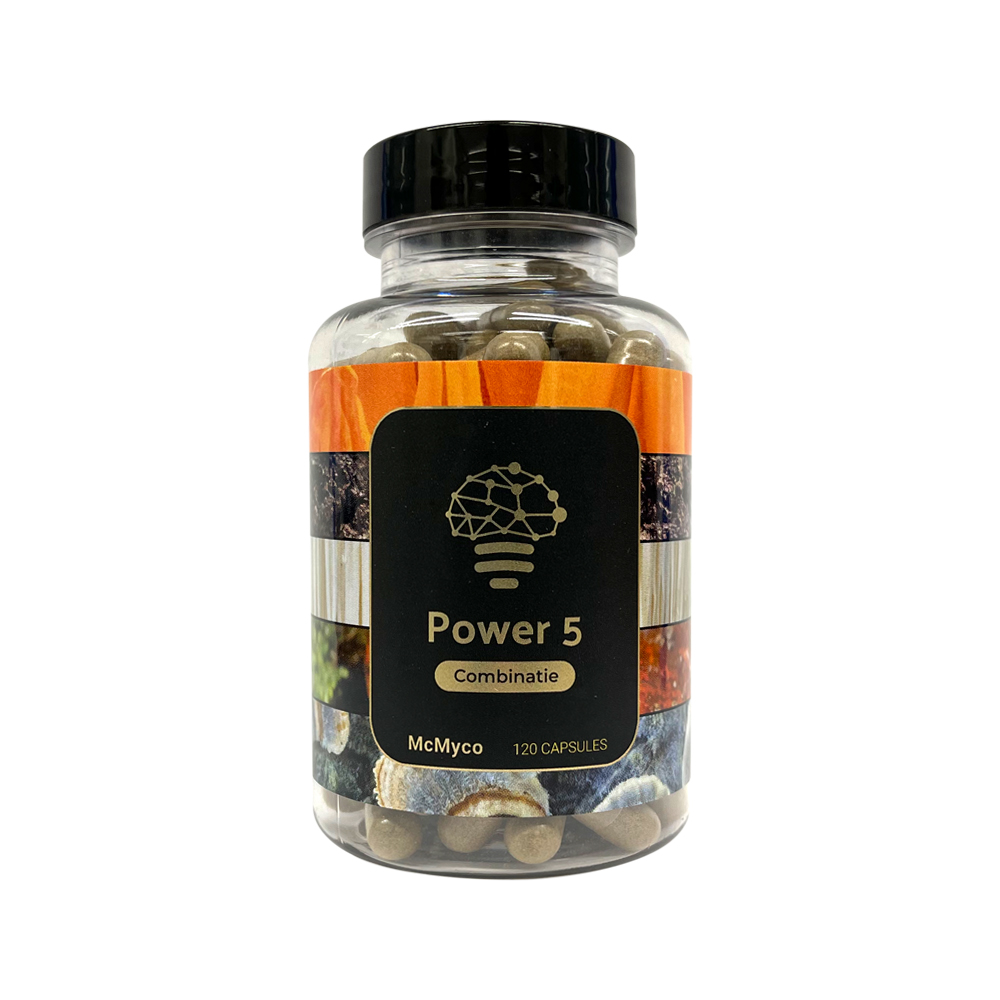 McMyco Power 5 contains five of the most popular medicinal mushrooms in the world. These are Turkey Tail, Chaga, Cordyceps, Reishi and Lion’s Mane. This powerful formula ensures a unique collaboration in which the properties of each mushroom are fully utilized.

About the Power 5 mushroom combination

McMyco Power 5 contains extracts of five of the most extraordinary mushrooms nature has to offer. Traditionally, these medicinal mushrooms have been used for various purposes for centuries (and some even for thousands of years). And now, after all these years, it appears that the enthusiasm of our ancestors was more than justified. We simply can no longer ignore the special features and benefits of mushrooms!

Chaga (Inonotus Obliquus) is nicknamed the black gold. This mushroom does especially well in cold regions. That is why you mainly find it in areas such as Canada, Siberia and Northern Europe. From the outside, this black fungus looks like burned wood, but inside it glows like a gem.

Want to know more? Read all about Chaga here

Cordyceps is a mushroom with perhaps the most interesting story. Originally, it only grew on the backs of insects, hence the nickname caterpillar killer. Fortunately, a specific variant, the Cordyceps Militaris, can also be grown on a natural nutrient medium. This is also the variety we use for our Power 5 combination.

Want to know more? Read all about the Cordyceps here

Lion’s Mane, or Hericium Erinaceus, is a unique medicinal mushroom. We also know this bearded tooth fungus and it has been nicknamed nature’s nutrient for the neurons worldwide. This mushroom is often used as a boosting supplement during Microdosing and is also an ingredient in our Brain Booster.

Want to know more? Read all about the Lion’s Mane here

Reishi (Ganoderma Lucidum) has been used in China for over 2000 years. There they know it as Lingzhi or mushroom of immortality. A special nickname for a special fungus! Mycologists from all over the world are full of praise for this brown-red mushroom that could not be missed in our Power 5 formula.

Want to know more? Read all about the Reishi here

Turkey Tail (Trametes/Coriolus Versicolor) is a mushroom with an almost legendary status. In China and Japan they have been big fans of this fungus for centuries. The main reason is the presence of PSK and PSP, to which some special benefits are linked. The Turkey Tail is also getting more and more attention in Europe, for example you can know it from the movie Fantastic Fungi.

Want to know more? Read all about the Turkey Tail here

How do you use the McMyco Power 5 supplements?

If you want to use the vegetarian Power 5 supplements, we recommend taking 1 capsule twice a day. Take the capsules preferably during a meal with water. Do not exceed the recommended daily amount.

Power 5 from McMyco is a dietary supplement and should be used as such. Food supplements are not a substitute for a varied, balanced diet and healthy lifestyle. Do not exceed the recommended daily amount. Keep the product out of the reach of children. Consult your doctor before use if you are pregnant, breastfeeding or have health problems.

Curious about the other McMyco mushroom supplements? Every product has its own unique gift!